It just dawned on me, that it is 20 years now, that I live in Germany. More exact, in the vicinty of Berlin and for most of the time in Berlin proper. Time flies…

Thinking about it, I still have more years on the clock living in my home country, Austria, than here (26 vs 20). But in a couple of years, this ratio will turn.

To this day, whenever I am asked: “where are you from, originally?” (a customary question in Berlin, the great melting pot, where hardly anyone is originally born and bred here, apart from my sweetheart and some of his school pals), automatically my answer is “I am Austrian.” This indicates, that I still feel, that I am a foreigner here.

But am I? The question is, do I really live abroad? Germany and Austria. In which ways are they different, the two neighbours, other than in size? Same lingo, similar economy and political system, lot’s of shared history, therefore very similar culture. One could argue, that there is no difference.

Most Germans I talk to, a very surprised, that I don’t have German citizenship. Whenever the topic arises, they always assume, I have applied for it long since, as if it were the normal thing to do or something, that automatically happens after a while. Maybe they even think it is the same thing. The first couple of times I was astonished to hear this, by now I have gotten used to it. I usually reply “Why should I?” This, in return, always surprises my German counterparts. I vivdly recall big eyes, as if they were taken aback by the very idea, that one would not want to be German. I think, this is both weird and funny.

Truth is, there was never a time, when I haven’t felt welcome here. To the contrary, almost ervery single German I have ever met, likes Austria and this gave me lots of unearned sympathy, which is a huge advantage to have. Ironically, my sweetheart is the only German I know with an express negative view of Austria and the Austrians (also expressly not my fault, phew!).
At the same time, I have never thought myself German. And I don’t think I ever will. Only come election time I feel at a disadvantage, because after ten or so years of living here I lost track of and interest in Austrian politics and am following the German equivalent since. I really would love to be able to vote here in more than the local elections. For this, I even considered to apply for German citizenship (to have in addition to the Austrian one). Germany would allow this, but after studying the Austrian Embassy’s website, I understand, Austria doesn’t. And I would not even consider to give up my Austrian citizenship -there you have it, I do live abroad, legally speaking.

To me, the differences between Germany and Austria are subtle, but many. Maybe, because I live in Berlin, which is different in its own right. The main differences stem from this region being a basically protestant region (vs. almost 100% catholic Austria), I believe. On the whole, I think, this is the core to the predominant mentality around here, which I’d call Prussian. Not in the sense, Austrians use the word Prussia or Prussians or their own (connotatively negative) term “Piefke”, but to describe, what I have come to love and respect about the folks around here: their discipline and – most of all – their straightforwardness.
And then, of course, on top of this, in Berlin the two special East/West cultures emerge, to not use the term clash, and have to live side by side and together. Which is sometimes funny to watch for an outsider (see, foreigner again).

If I lived in Bavaria, maybe I wouldn’t feel a foreigner at all. But then, I’d never want to live in Bavaria (or anywhere else in Germany south of Potsdam). After all, my first 26 years in Austria I spent mainly wanting away as far as possible. Didn’t get very far, but nevertheless… 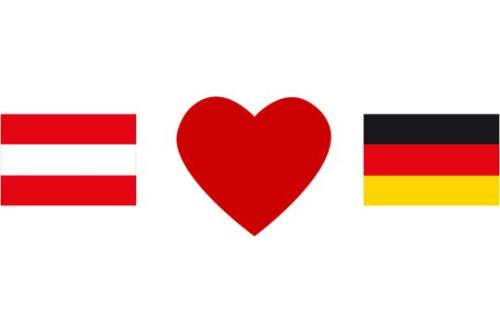