I stem from parents, who out of nothing created a home and a living for us all. By their hard work, their ability to scrimp and save, foregoing pleasures I take as a minimum of living standard today. To this day, consumerism is a loanword to them. They’d rather mend used or second hand clothing than buy something new, eat selfgrown vegetables or gather wild fruit and mushrooms than go out to a restaurant, read a week old paper from the neighbours trash pin than getting a newspaper, collect wood to fire the extra oven rather than putting up the central heating a notch and so on. Even if they could afford more of the mentioned “luxuries” today, than when we were kids, they still save their pennies, in order to have something for emergencies or to give to their children, later their grandchildren. And soon to their great-grandchildren, too.
I, on the other hand, have a much weirder relationship to money. Being responsible for my own sustenance since I am 15, I always spend what I have. All of it, at times even more (the emergencies, I am never prepared for). The sum available doesn’t matter at all. I remember having to live off the equivalent to  50 a month, paying for a shared room, food and necessities, still having the odd Schilling (Austrian currency way back when) to spend on a coffee out. Given, thirty years back, money had a different equivalent value, we tend to forget. I still transfer prices back to the currency of my youth, sometimes. Multiplying current cost by two, to get the value in D-Marks, then multiplying again by seven, to get the amount in Schilling. Just to find out, that a sandwich at the gas station costs more than 50 Schillings, a banknote of such high value once, one was hesitant to break it up. I would never have spent that amount on a sandwich. And the cost of filling the car with gas I don’t even bother to work out. It would be a full months earnings. But then again, having a car was outwith my reach then, anyways. It took me ten more years to have the money to pay for the driving school and test to get a licence. It was riding a bike, walk or take the bus, back then. Which was ok. And much healthier, too.

Mind you, my private balancing is in no way comparable to sums or fundings I manage for third parties. There I seem to have a quite good business approach, always. But for myself, I am just getting by. Independent of what amount I earn. Which I am ok with, most of the time. What bugs me a little, is that I seemingly am not able to build or get myself anything of lasting value, ever. Some land, a house or something the like. Looking at my siblings, who stem from the same stable, so to speak, both raised big families and own their homes (I think). I have no idea, how they managed. Apart from knowing, that most of my parent’s extra went towards their grandkids, which is absolutely fine with me. What also gets on my nerves, is that I am seemingly only able to save money backwards, meaning, I overspend and then pay up later for the overdraft or loan. Apart from the stupidity of having to pay the extra cost – I hate financing the bank – I have lost the ability to stick to the parental cast-iron law to never spend more than what one has. Knowing, that I’d be able to make it up somehow later, I’d rather have, what I want or think to need, on the spur of the moment. I have to change that. And I will, too. Or so I hope.

To end this maudling complaint about my inability to hold together those wads of printed paper, I want to finally show you, what set my thoughts off on something, that really is not that important at all. Or is it, in a broader sense? Have a look at what a Greek street artist, called Stefanos, created. Little ink drawings on Euro banknotes, to express how money, or lack thereof, effects the Greek. As far as I understood what little is known, he not only altered the notes with his drawings, but faked them first, then spent the counterfeits in order to feed them into the money cycle. This is illegal, but is it subversive? Isn’t the Eurpean Central Bank doing the very same, printing vast quantities of (uncovered) money flooding the market, as we speak? I just think, the artwork is fabulous and says much more about money than I ever could in so many words… 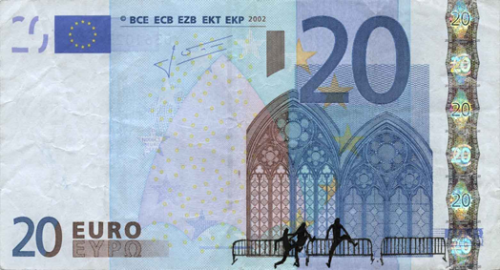 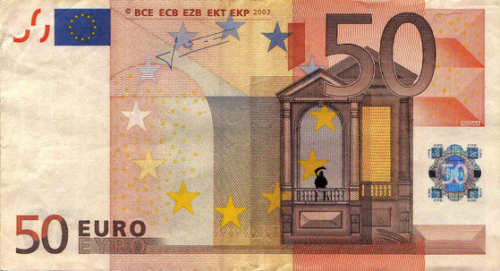