The biggest Jewish sport event is about to start next week. The European Maccabi Games 2015. In Berlin, of all places.

With most of the sporting events held at Olympia Park and Stadium. Just imagine! Over 2000 Jews from 30 different countries competing for medals at the very venue, they were excluded from in 1936, with the Reichssportführer declaring; “Jews are not morally liable to represent Germany in the Olympics.” And this was just a beginning, with far worse to come in the following years.

The Maccabi World Union was founded 1921 to give home to Jewish athletes, who were often not welcome in other sports clubs due to anti-Semitism. In Austria, for example, Jews were barred from membership in gymnastic clubs as early as 1901. Nobody tell me, it was just Hitler. It was the people themselves, causing an air of hate, that eventually gave room to the rise of the Nazis and their atrocities.

I am proud to say, that the golf part of the Maccabi Games 2015 are to be played on our golf course next week. This evening, the German team will arrive for their practice rounds tomorrow and Monday.

I just love the advertising campaign, the Maccabi team launched, with those three posters plastered all over Berlin: 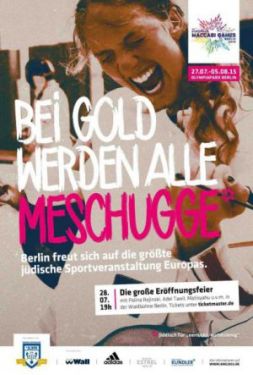 Goes to show, how deep Yiddish is rooted in the German language, still. Despite our fathers efforts, to erase all of those riches. There is no way, to ever compare the losses suffered by the Jews to anything else. But I think, we (Austrians and Germans alike) have lost a lot, too. And it is our own fault. The humour, the intellect, the art – all murdered. A swath of destruction, leaving a gap in our culture, that is impossible to refill.

But those three posters give me hope. They show wit and intellect. And the unbelieveable willingness of Jewish folks, to still put up with us, live with us. Be part of our life. I am thankful.