There is the one Berlin (west) soccer team: Hertha BSC. Blue and white are their colours, ha ho he, Bertha BSC is the fan chorus.

And I personally think, they are lousy. Ok, they are recently on fourth spot on the German Bundesliga table. But this is mainly due to very bad results of other teams, I guess.

But there is another tournament series in soccer. All over Germany, fans chant the famous line: “Berlin, Berlin, wir fahren nach Berlin”, whenever their team wins in one of the games, erasing another opponent from the list of teams to decide the best soccer team in Germany in this drop out format. Semi finals and finals are traditionally played in Berlin, hence the chorus line of going to Berlin.  It is called DFB Club Pokal and Hertha BSC has not made it into the semi finals, let alone the finals, in more than thirty years.

But this year, they did. Olympia stadium was sold out within days of Hertha qualifying. My sweetheart being a born and bred Berliner, of course he is a Hertha fan. Albeit this being a very masochistic life, he can’t help it. So I thought, I’ll give him an early birthday present this year and got us tickets to last night’s game.

I was looking forward to it as well, as the opponents happened to be BVB Dortmund, the one German team I favour. I knew I would be a loner among all this Hertha fans, but someone needed to cheer on the guest in yellow, too.

As it happened, it was a great experience, to be in a crowd of 76.223 soccer fans of an evening in this beautiful stadium. The roughly 4.000 to 5.000 BVB fans making a considerable din from their corner in yellow and black, instantly answered by the rest in blue and white with HA HO HE, HERTHA BSC. 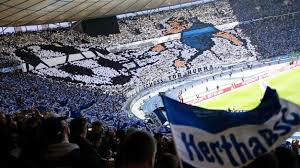 The game itself was disappointing. For my sweetheart, at least. I couldn’t tell, that the Berliners were eager to win. After BVB scored their first goal, it seemed the Hertha players were stalling for time. As if all wind had been taken out of them. Really, there was no comparison in class, so the winner clearly was going to be BVB. Which they were, in the end, scoring 3:0, thus making it into the finals. Their opponent  was decided already, so it will be Bayern Munich vs. BVB Dortmund in the finals. As it should be, those two clearly being the best two teams in the country. 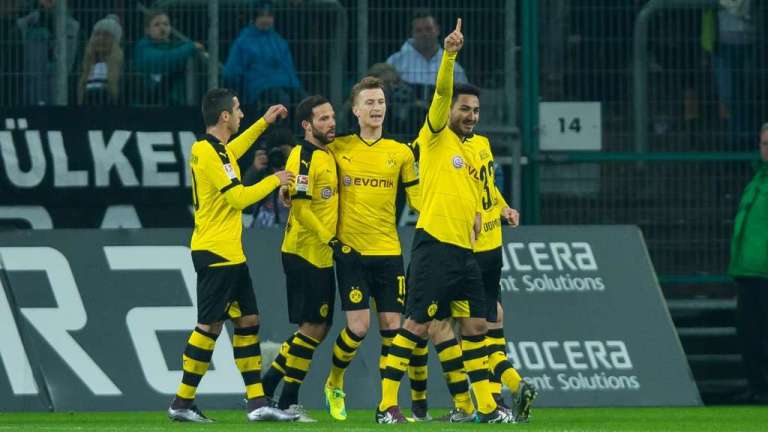 I just felt sorry for my sweetheart, having to watch his team getting beaten so bad. But they didn’t put up much of a fight, either. I was in a much better mood, of course, as “my” team won, albeit the intention clearly was, to give my sweetheart a good night out. Bummer.