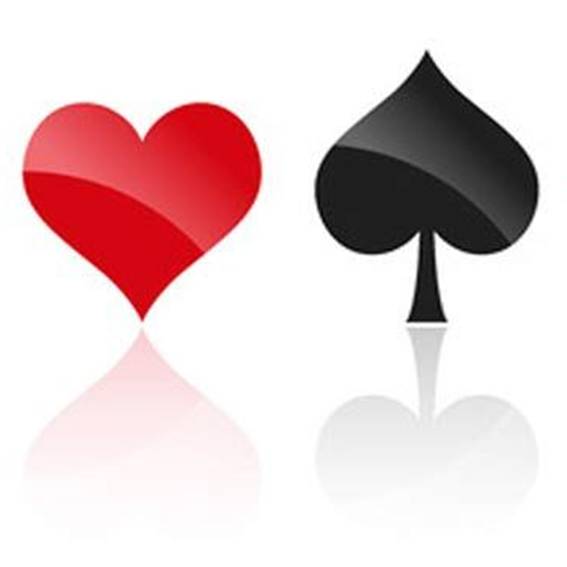 This little story is not about bridge, as misleading as the opening picture might be. But it is a story about one heart – in this case my sweetheart – and two spades.

As often is the case, the story starts thus: Once upon a time…

… I was gifted a spade. It was a Christmas present from sweetheart’s mom. The blade was made of good quality steel, its arm of solid hardwood. A great, no-frills tool. It was much appreciated and often used in my little garden. Also for reclaiming new patches around the house, where the spade was used to dig away the worn out grassland to make room for good gardening soil. Filled in with said spade.

Just so it happened , that I was digging away a few days ago. Behind the house at the wall leading to underground parking, I found a sunny spot I thought would be suitable for a little additional potato patch. So I cleared away the ivy shrubs along the wall and started to dig the ground. But the spade got caught at something, a root maybe, and would not give an inch. So I applied more pressure. Still no movement. I applied as much pressure as I possibly could. Which is my entire body weight, leaning into the dipper full force. Knowing my weight, I also should have known, that no hardwood on the planet is hard enough to withstand such a force. SNAP, the handle broke in two. Actually in three, but this is just an unimportant trifle in an otherwise straight story.

I was upset. Not only was I unable to proceed with the project at hand. I also realised, how much I liked that tool. And Easter was just ahead, so none of my other, planned gardening projects would be possible.  Oh my, what would I do over Easter! One can clearly see now, what a big, upsetting disaster this was. So I quickly ran to sweetheart, to tell him about what happened and that I was off to the garden center to buy a new spade.

Enter sweetheart, the knight in shining armour: “Don’t you worry, darling. I will fix your spade for you. We’ll just get a new shaft at our lokal hardware store and your spade will be as good as new in no time.” A man of few words, he took off immediately, soon arriving with a brand new spade shaft. Fetching his tools for the repair.

I sat on the patio in the spring sun, watching his proceedings with curiosity. In case I ever again came into a position having to replace a tool shaft by myself, I could now learn, how this was done.

Sweetheart looked at the spade with the sorry wooden stump sticking out. He applied a big pair of tongs, trying to force the wood out of its metal casing. Sweat started to pearl down his temples, but nothing much happened, other than a bit of wood splintering off the top, where the pliers gripped it.

I did have a faint recollection of my granddad fixing axes or scythes. He replaced little wooden shims wedged between shaft and tool and then kind of knocked the shaft out of the metal from the bottom. A process which was often lenghty and accompanied by slight maledictions. I mentioned this tiny piece of expertise. However, looking at the spade’s back, presented to me by sweetheart, I could see, there was no opening in the metal at which to knock against the wood to make it slip out of the grip. He was also bewildered, so he went to ask the internet for help. There he learned, that this was called encased fixture. Great.

Out came his entire parade of heavy machinery. Starting with the hammer drill attempting to remove the wood. Applied so fiercely, I began to worry about all kinds of possible injuries. I went to get the phone, in case I needed to call 911. As drilling would not help much, out came the pad saw to even out the stump. More heavy drilling, trying out various calibers. Some splinters of wood sprang around, but by no means all of the remaining stump. Then came a screw driven into an opening in the encasing metal to create a lever by which to force the rest of the wood out. Loud hammering ensued,  untill something gave way. Unfortunately it was the screw, not the wood. Meanwhile, the entire patio was turned into a workplace, many tools strewn about and lots of noise created. The only traditional of which, resembling my memories of the task at hand, were the curses.

As this was an exceptionally nice, sunny day and many neighbours also tried to enjoy the good weather outside on their terraces and balconies, I didn’t want their curses to join in. So I suggested to just go to the garden center anyways and get a new spade after all.

But now sweetheart felt challenged: “Do you think that I will give in to this stupid piece of sh…? No way! I just bought this shaft, it won’t go to waste, trust me.” After some more futile attempts he decided to have a break, give the problem some consideration, maybe sleep over it. “But the Easter holidays….” I murmured quietly. I was sad to see my Easter occupation slip away and restored the patio back from toolshed to habitable.

Good Friday came and went. So did Easter Saturday. We spent it shopping for sweetheart’s mom. He later went by her house to drop off the groceries. And came back with the sign of his defeat: a new spade. And if it won’t be brocken by me, this second spade will live happily ever after. Just as happy as I was, come Easter Sunday. Finishing my new potato patch with my brand new  spade. And if this second spade ever breaks, no worries: I have one good as new spade blade in the cellar. One only needs to remove a stump of wood, insert a new shaft and there you are…)

5 thoughts on “Tale of one heart and two spades”