Tuesday night was the second leg of the little tournament series I am set to participate this golfing season. Still made last spot. I did mention, I was going to disappoint myself, didn’t I? I also mentioned, I never get round to practice. All true.

However, this is not the topic for this entry. It is the storm rising up right after we finished. All the players sat together in the restaurant, when all of a sudden, the chairs on the terrace took off into the air We all ran out, to tie down as much as we could. Piling the chairs in stacks of six or eight, to give them enough weight to withstand the gusts and not be blown all over the golf course. The shading tent for golf gear in front of the terrace never made it, it was ripped to parts.

Only when the wind calmed down after twenty minutes or so, did we notice the storm cloud pushing itself from above us into Berlin. It looked a lot like the alien spacecrafts in the movie Independence Day.

But we were lucky. Further north on the coast real tornados struck. The old town of Bützow has been heavily hit with 30 people injured and most roofs off. And at Winston Golf Club near Schwerin, somebody managed to take a great picture of a vortex forming itself behind the golf course. 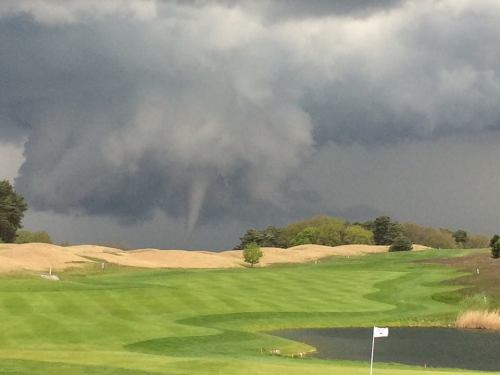 One thought on “storm”