Meet Ken Vrana this week. His profile at Saatchi Art reads thus: “Internationally-recognized fine artist, Ken Vrana, has been painting for over 57 years  55 of them professionally. Abandoned at birth, he was extremely fortunate to be adopted by parents who recognized his artistic abilities early and because he grew up in the Hamptons, he subsequently studied with seminal artists like William DeKooning, Larry Rivers and Ashcan School artist, Valentine Arborgaste. In 1965 he was invited to participate in a special sculpture program at Syracuse University, and in 1966 he started school at Brooklyns Pratt Institute. During the next few years, while pursuing a degree in Interior Design, he also studied with artists like Andy Warhol.” 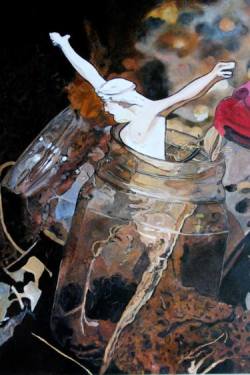