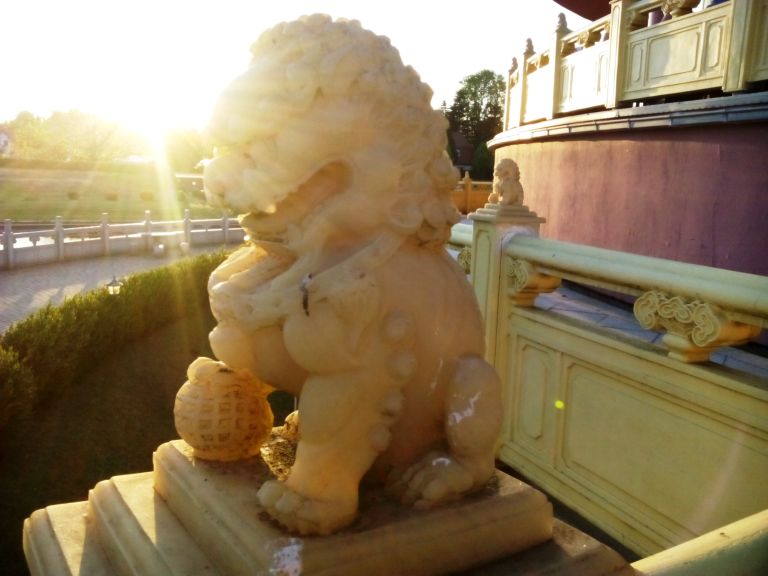 As you might know, I live and work in suburbia. The two cities I work and live in are glued to Berlin’s north, right where the Berlin wall used to run. But on the “wrong” side of it. So I am technically in Brandenburg, not in Berlin anymore. However, I am sure it won’t be long, until all of this is swallowed up by the city and will be called Berlin proper. As it is, the place I live at is called Glienicke, the place I work at, Hohen Neuendorf. The latter has a most unusal attraction, called Himmelspagode (heaven pagoda).

It is a Chinese Restaurant of enormous dimensions. Three storeys tall, it seats at least one thousand people. I have heard, that the top floor is very popular for wedding receptions.

I work in the same place since 1999, yet I have not once eaten there. I don’t know why, actually. Maybe I don’t like huge restaurants. Or it was a case of prejudice, someone remarking on bad food served there. Or I felt, the thing is an eyesore in the otherwise typical suburban surroundings with much green between detached houses.

But a week ago, I met the owner at work. He was a guest playing in a tournament sponsored by a local financial institue. A rather young Chinese, 40 at most, who was extremely pleasant and joined our golf club the same day. As we sat to do the paperwork on it, I mentioned another Chinese couple, who are members at our club and are real nice folks. Both are doctors, the Lady specialising in traditional Chinese medicine. She is known all over Berlin as the best acupuncturist in town. Of course, I just meet them in their spare time, but both are real sweet people, always happy and friendly toward everybody.

I knew, this couple was also playing a round of golf that day, and the new member said, he knew them. They have met years ago in Frankfurt am Main. As it happened, the couple just passed outside my window on their way home, so I opened it to call them back in and have them meet the new member. It was a big surprise and great pleasure for all. Turns out, the doctor Lady’s aunt and the new member’s mom are from the same village in China and were childhood friends, whith the young ones growing up not far from each other, meeting decades later in Frankfurt, to go on their seperate ways again. The doctor Lady kept mentioning, that the new member was a very good businessman. I take this to be a compliment in China (here in Europe, one wouldn’t say that, people rather try to hide success or wealth and not make a big ado about it). Whereas the new member repeatedly said, that the Lady is a great healer (which I already knew).

Then they jabbered off in Chinese in a lively manner and this was, where I lost track of the conversation, of course. Wondering about the chances, that these people were all washing up in Berlin again, eventually, meeting up in my office. Given the sheer amount of the Chinese population and the vast expanse of the country. The world is small, indeed.

This incident was most likely the reason, to agree to my sweetheart’s suggestion to dine out at the Himmelspagode last night. And it was really delicious, with a great selection of Dim Sum on the menu, which I love. So I just had every variety of these, forgoing a main course. A decision met with very kind approval of our waiter. Excellent choice, he said. And it was.

But the bulding itself was the main attraction, actually.

We sat outside on the terrace, as yesterday was a beautiful sunset underway, but I had a look inside. The circular, really big structure was organised in a way, that despite the size of the room, everybody could feel cosy and comfortable at their tables. Elaboratly furnished and decorated in all-Chinese. With much shiny, lacquered red and black wood, adorned with a glimmering addition of gold. Quite a sight.

However, I was caught by the lions, adorning the steps, entrances and even the wall around the terrace, our table was at. The little figurines served as light source, we found out later, when it became dark and from underneath each lion’s paw a light shone. As long as it was bright, I noticed, that the lions all had a curly mane, running down their entire backs. From now on, I shall call this restaurant The Curly Lion and will recommend it to everybody. 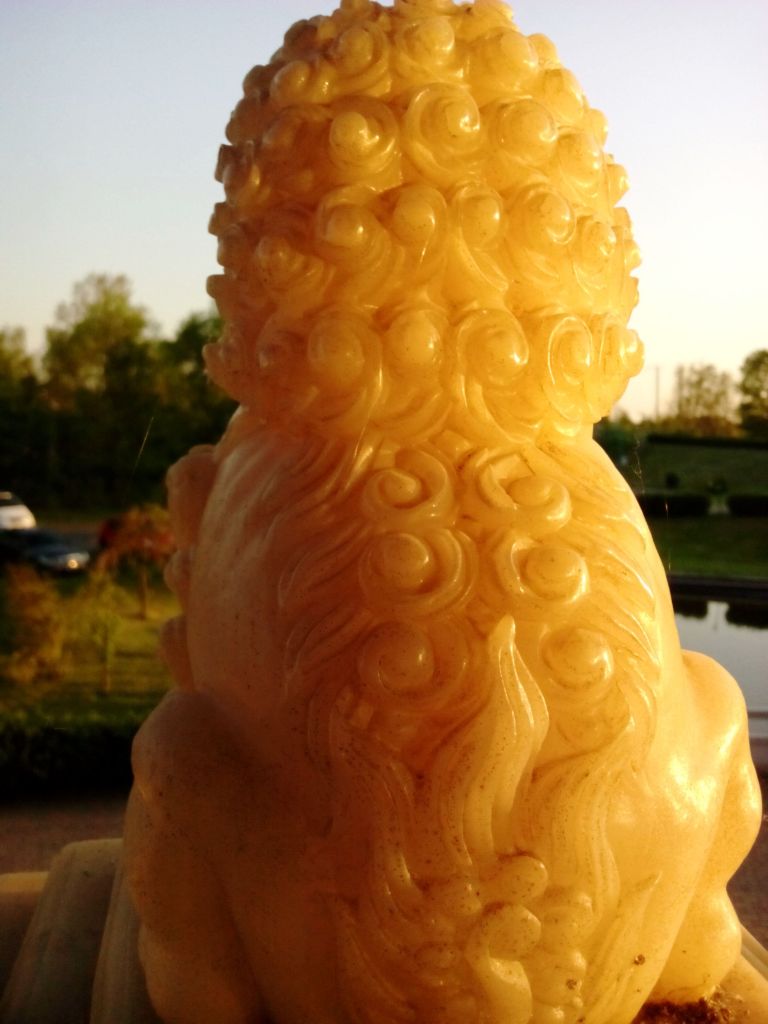 8 thoughts on “the curly lion”