It’s just regular governing. The German Government has put a committe in charge of updating public contingency plans some four years ago. As the versions in place stems from a time, when the cold war still was on. And might be a tad outdated.

Some new scenarios were added to the list of emergencies, that could threaten the public. Cyber attacks, disturbing public infrastructur, transport, finishing off power supplies or fiddling with the public water system, for instance. All very feasible threads.

After four years, the committee now presented its suggestions. Including some advise for citizens. Like having a supply of bottled water and food stocks for at least two weeks at home. If I were on such a committee, I sure would suggest the same. Even without thinking of apocalyptic menaces looming. The paper also included various suggestions for offical strategies, like regulating supplies to go to core facilities first (hospitals, for instance), suggestions to improve the serviceability of public offices and governing bodies in a crisis and so on.

If you ask me, all very reasonable stuff. Well done, government! But what happens in the country, the expression German Angst comes from? People freak out. At least, that is the impression, one gets, following the media. Reports of panic shopping pop up, the topic is discussed at lenghth on the news and in papers. Lists of shopping suggestions are available on the internet. Since weeks. Various experts are airing their concerns and opinions as to why the suggestions of the committee are completely insufficient in the case of an emergency or why they are completely off target and wrong or way over the top, depending on whom you choose to listen to. 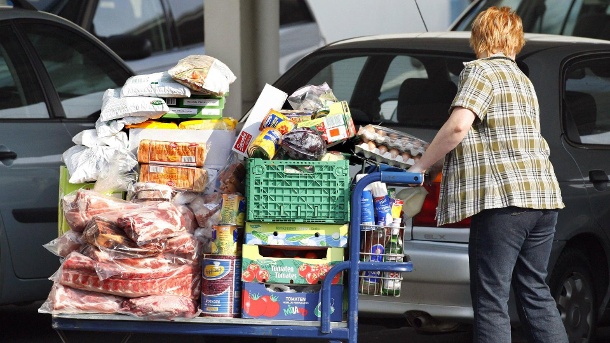 It can only be the typical summer slump at the news offices, adding such a fevered dimension to an otherwise completely sensible occurrence.

I personally grew up in the country with parents and grandparents, who lived through wars, harsh winters, droughts and other incidents, sometimes – in the case of my grandparents – completely cut off from everything, due to too much snow or what not. The next village an hours walk away, if one could use the road at all. The next doctor a three hours walk away. With no phone, no car, nothing. So stocking up for the cold season was normal. I have to be honest, I miss the security one gets from a cellar full of potatoes, turnips, carrots, apples and onions and an attic full of dried herbs, mushrooms and smoked meats. Shelfs and cupboards well stocked with jams and preserves. Having your own well and a power generator to run it (in addition to the little stream of alpine water rushing next to the house), lots of wood stacked outside for heating and a stable with some life stock as well as a shed full of hay to feed it. For all I knew as a child, there could have been anything coming, we would have done just fine for a year or so. And even then, there still were the woods full of berries, mushroom, wild fruit and so on.

Now, living in suburbia, things are slightly different. Maybe I should give some serious consideration to what was suggested by that government paper, after all. One tends to forget ones dependence on energy coming from the plug, warmth from turning up the heating, cool storage available at all times in the fridge and freezer and water running from the tab. Self-sufficiency would be great.