On Sunday at Mauerpark, someone had brought along a few buckets with soap water and some rope devices to produce big soap bubbles.

I like the picture above, the man seemingly producing wordless speech balloons. As if he were thinking of nothing. I can’t help admiring the beauty of those fragile, floating spheres, however shortlived they might be.

I recall loving the game, when I was a kid. Once or twice, our parents bought us the little, dark blue tubes with soap liquid in them and a little yellow plastic stick with a loop fixed inside the screw top to blow the soap water into a burst of glassy, shiny bubbles. How I loved watching the rainbow colour reflections on them, seeing how they turned in the slightest breeze. How some of them survived, gently falling to the ground and sitting there for another second, before they burst into a tiny blotch of liquid again. 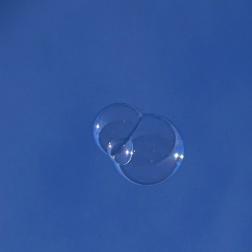 Of course, we never had the devices for producing giant bubbles. No wonder, I was enamoured, watching old and young playing on Sunday. There were two sticks with a rope fixed between them. The rope had a couple of loops knotted in. It was dipped into the soap bucket and then swung into the air, releasing sometimes huge, spaceship looking tubers of bubbles. But I still liked the smaller ones best. The kids had great fun, chasing after the bubbles, trying to catch and burst them.

One thought on “fragile floating spheres”