Yesterday afternoon our visitors had to leave already. Three and a half days full of activities, sightseeing and shopping. Plus the obligatory games of Scrabble and single malt scotch evenings, discussing all and sundry, while the kids were tucked away in their beds.  And didn’t time go by in a blink, leaving sweetheart and me a bit sad, but tired, too. With only our little cat Lilly in high spirits, reclaiming her seat on the settee in an instant, looking all satisfied with being the center of our attention once more.

The kids kept up amazingly well, I thought. Taking into consideration, that it is still winter here. Temperatures well below zero and icy winds making the city quite hostile. While I am sure, Saturday repaid the teenagers well, allowed on their own, unattended shopping spree at city center west, circumstance and I meanwhile browsing book stores and frequenting a nice coffee shop, followed by a visit to a life escape game venue for almost all of us, Sunday was a different story.

Full ten hours straight. Out and about in town, looking at sights to see in city center east. Gendarmenmarkt, Museum Island, the Catholic and the Protestant main churches – the St.Hedwig’s church and the Berlin Dome, we ended up with two hours to spare until it was time for dinner and evening entertainment. 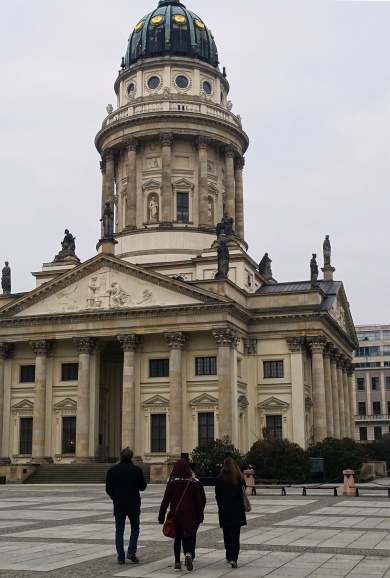 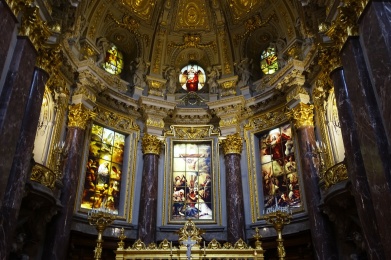 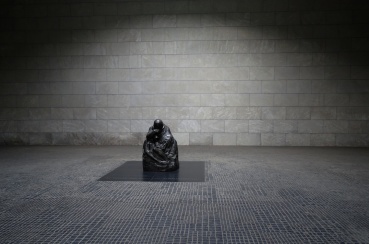 None of us really wanted to go back out into the cold, once we settled in a cafe and drank hot chocolate to warm up. I was getting a bit panicky, as I had no idea how to bridge that time. Luckily sweetheart came up with this great idea: let’s try bowling! Turned out, there was a bowling center closeby, situated right next to the “Red Town Hall”.

Everybody had a great time. For the kids it was a first. Sweetheart and circumstance used to be avid bowlers in their younger years, as I found out to my surprise, but both haven’t played in years. I tried it once or twice before, but as with most sports, am not that good. I have to say, it was great fun, though. Sweetheart started off without hitting any of the pins at all for a couple of times in a row and was getting desperate. But all of a sudden, it all seemed to come back to him and the strikes and spares kept coming in. Circumstance was good from start, so was her older daughter, who played just like me. Most of the times we managed to drop a few pins. The youngest had a hard time to start with. Her balls kept dropping off to the left. Until we suggested, she uses a lighter ball. After which she bowled real well, even beating me. Well done, sweety!

The evening was reserved for a visit to a bar with live music going on. As the concert, we originally wanted to see, was sold out. But sweetheart found this venue in Friedrichshain, were there is a Jam Session on on Sunday nights. As my friend’s oldest daughter is a great singer with some stage experience already, we thought, she would enjoy this. And for teenagers living in rural Austria, any visit to a grown up bar should be fun, we thought.

We ended up being the ones having the greatest fun, I think. Sweetheart asked the girl, if she would want to sing. She said, her repertoire might not fit the place, as the band played what she considered Oldies, Rolling Stones and the like. But then one song came to her mind, that might fit: Ain’t no sunshine since she’s gone. So sweetheart spoke to the manager, telling him, there was this young talent from Chicago wanting to join in (forgetting, that my friend is actually from Milwaukee and her daughters, both adopted, were born in Ethiopia and grew up in Austria – so no Chicago anywhere, but to Europeans, Chicago is close enough). So she was introduced to the crowd as XY from Chicago and after a short professional discussion between the band and the girl – I take it was about keys and the like, I don’t know the first thing about the workings of music – the band started to play and the girl took to the microphone. When she sang the first line, the crowd fell silent all of a sudden. Her voice charmed everybody and people listened in awe, some started to dance. When she was finished with the verses, the band just kept on playing and motioned her to repeat a verse. This was truly magical for me to experience. Of course I have seen videos of her performing at school concerts and the like, but this was different. A bar full of strangers gripped by this 16year old girl’s voice as if she had been entertaining crowds for ever.

The entire place cheered and shoutet: one more song, one more song! So she sang Autumn Leaves and the band invited her to stay, as they did their last song, Purple Rain from Prince, to do some back up singing. I’d love to add some of the pics of her on stage, but I refrain, as I don’t want to give away the girl’s anonymity. As soon as there will be newspaper and tv reports about this up and coming internationally acclaimed talent from Chicago, I will make sure to update you and brag about me knowing her since childhood 😉

And I am sure, it won’t be all that long until the public is going to know her name. Until then, I’ll leave it to just posting the venue…

All these adventures left everybody tired, so yesterday we just slept in and had a late breakfast, idling  around until it was time to go to the airport. I couldn’t believe, it was already time to say good bye again. Hadn’t we just said hello?