It was windy and cold last Sunday, so we opted to go inside various Berlin sights just to warm up a little. Including churches. Thus, I saw the main catholic dome in Berlin – the St. Hedwigs Cathedral – from inside for the first time. I was surprised to find it unostentatious. Usually, I assume catholic churches to be splendid, even excessively ornate, when it comes to baroque style interior. Which many of the churches and cathedrals back home in Autria are, the country being mostly catholic.

Generally, protestant architecture tends to be much more sober and lo-fi. I have been to the main protestant church in Berlin before, simply called the Dome, as Berlin and Germany’s North is predominantly protestant. It is very ornate for protestant churches, but it is the main building for this religion far and wide, so they have overstated a little, I thought. And expected the catholic variation to be even grander. Wasn’t, though. Here are a few comparisons in pictures, the protestant version on the right, the catholic on the left. 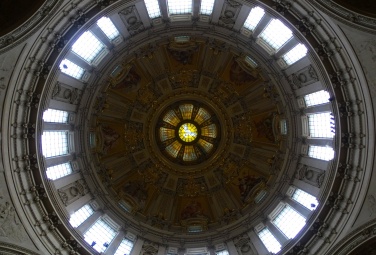 If I were shown just these pictures and had to stipulate, which building is which denomination, I’d have gotten it all wrong. Berlin is different in every way, it seems. Go, figure….